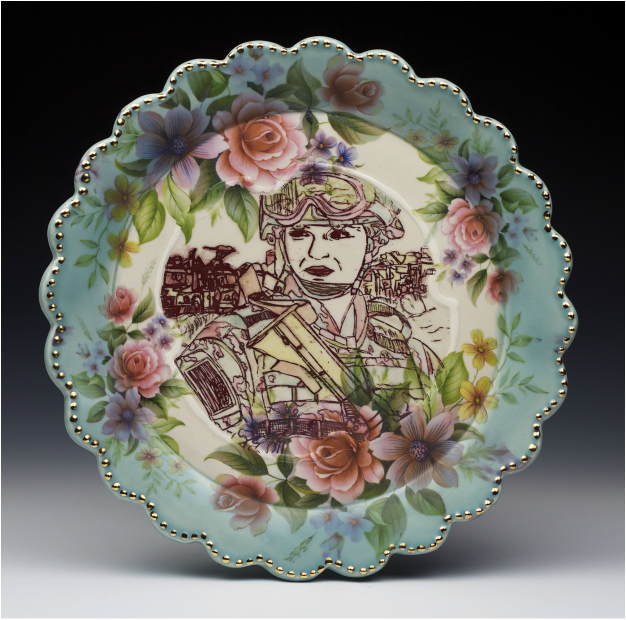 Jessica Putnam-Phillips grapples with the medium of ceramics, one that is loaded with very specific meaning and associations.  In her work, she attempts to the use the material of clay to carry a different meaning.  She takes the notion of serving – and uses the objects she makes, traditional heirloom platters, to depict women who serve in the military. This carries biographical weight as well, and is reflected in both the form and content. She upends associations with gender, those of domesticity and the military.  As with many contemporary ceramic artists, Jessica is engaged in subverting the material itself.

"The combination of a brilliant illustration skills, conceptual use of pottery, and modern themes have found Jessica Putnam Phillips huge art world success in 2015."
-CFile  15 Potters to Watch in 2016.

Art Report: Female Military Combat Veteran Makes Hardcore Fine China By Allison Shyer
Don’t let the dainty florals and smooth finish of Jessica Putnam-Phillips’s porcelain creations deceive you – hiding between the delicately rendered flora are female snipers in fatigues and combat helmets, armed and ready to shoot. The ceramics most often frame close up of females in active combat. Their eyes are fixed on a point in the middle distance while their poses reflect a tense readiness. Phillips uses her craft to bring to our attention some important messages about gender, combat, and the life of a female soldier on duty.

“THROUGH THE EXPLORATION OF CERAMIC TABLEWARE AND NON-TRADITIONAL IMAGERY I SEEK TO CHALLENGE THE ENTRENCHED IDEAS OF DOMESTICITY AND GENDER ROLES WHILE EXPOSING THE SOCIAL AND CULTURAL ISSUES FACED BY MILITARY WOMEN” SAYS PHILLIPS IN HER ARTIST STATEMENT.

Jessica claims that she wants to focus on the juxtaposition of serving at the dinner table and serving the nation, bringing to light social and cultural issues that female soldiers face within the highly masculine field of the military. The table-wear itself embodies this juxtaposition in its rendering. The florals are depicted in a style that is baroque and unapologetically abundant and colorful – while female soldiers, at the center of the pieces, although equally detailed, have a sketch-like quality and are rendered only using a dark ochre.

The style seems to suggest that the experiences and memories of the battle field are incompatible with the expected performance of womanhood, and rectifying those things in one piece of art would be insincere. Still the compliment is in the contradiction, and it is the exactitude with which Phillips renders the portraits that compliments the florals.

Phillips’s dinnerware ask us to re-contextualize what we understand to be feminine labor;  and they connote the complex relationship that military women have with concepts of domesticity as they are continually asked to prove their competence and legitimacy in a male-dominated field.